A simple guide to Hypothesis Testing 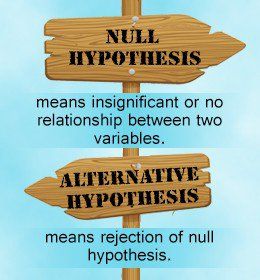 Inferential statistics help us to infer unknown properties or behaviour of a larger population by studying a representative sample, using various statistical testing procedures. For example, studying the effects of a new treatment over a small group of people to test if it performs better or worse than the standard treatment, or inferring ratings of a movie from the viewers’ comments and reviews.

Inference can be deduced by two methods — 1. Estimation ( Point & Interval), and, 2. Hypothesis Testing. Estimation refers to estimating a parameter of interest (like mean, standard deviation) based on information from a randomly chosen sample. Hypothesis testing refers to testing claims or statements about a group or population using the data from the chosen sample.

In this article, we will focus on understanding the Hypothesis testing.

A statistical hypothesis could be defined as a statement about a population parameter (e.g., mean, median, mode, variance, standard deviation, proportion, total), or a statement about the kind of probability distribution that a certain variable obeys. Based on a sample from the population, a statistical test is conducted to make a binary decision on the proposed hypothesis, denoted by Ho: reject Ho or not reject Ho.

Hypothesis testing process can be summarised in the following steps:

4. Compute the p-value, or find the critical/rejection region: p-value is computed using the test statistics. The p-value is the probability of observing a sample statistic that is at least as extreme as your sample statistic when you assume that the null hypothesis is true. Simply put, p-value measures the discrepancy or contradiction between the Null hypothesis and the sample data.

5. Make a decision: A decision can be made on the basis of either the p-value or the critical region.

Based on the p-value, if:

In order to make a test powerful in the sense that the chance of making an incorrect decision is small, the critical region should consist of those values of test statistics which are least supportive of Ho (i.e. which lie in the direction of Ha).

Types of Error while making a decision

Since the decision is made on the basis of a sample and not the entire population or group, it is possible to make errors in concluding the null hypothesis.

The correct decision is to reject a false null hypothesis. This decision is called the power of the test. The power function of the test can be defined as

Statistical hypothesis testing requires several assumptions like the method of sampling the data, the shape of the population distribution, and the sample size. The specific assumptions may vary, depending on the test or the conditions of testing. However, without exception, all statistical tests assume random sampling. Tests of hypotheses about means require that the population under consideration be normally distributed or that the sample size be larger than 50 because if the sample size is sufficiently large (N > 50), basing on the central limit theorem, the probabilities of all other possible sample means we could select would be normally distributed.

To summarise, one should define the Null and Alternate hypothesis carefully, and compute the test statistics based on the underlying assumptions for the sampling distribution of the sample mean, and make a decision to reject or not reject the null hypothesis based on either the p-value and significance level, or the critical value and the computed test statistics value.

Thank you for reading. Please share your feedback or comments.